Beginnings – Part One of Three

The Middle – Part Two of Three

True transformation isn’t about a scale number or a visual aesthetic. It’s about becoming something bigger, something more than the sum of your parts. It’s about pushing yourself to new places and believing in the impossible. It’s about leading by example and teaching others. It’s about facing down your fears and overcoming new obstacles as they come up. It’s about continuing to dream big, chasing those dreams, and eventually catching them.  It’s about finding inner peace.

The initial transformation is only a small part of the whole. I made those changes and started looking for others who had also done something similar. Listening to the stories of others who were walking the same path introduced me to some amazing people. I found women like me who had made changes to their lives and were now looking for a new way to pay things forward. It wasn’t about being famous or having glory. It was about finding the words to help others on their journey. It was about seeing a face light up when they hear a story they connect with. In those words, through my story, people could find a thread which resonated. It was something they could grab on to and start to weave a new story for themselves.

This was the idea behind the Five-for-LIFE challenge. Five women who had individually used Body-for-LIFE to help themselves lose significant amounts of weight came together and decided to do a group challenge with a single purpose — to show people there is hope. They came together to show other people that they could indeed do this and that they weren’t alone. 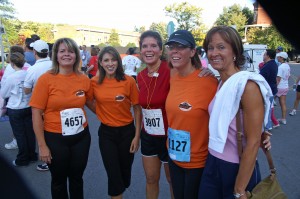 Over a 12 week Body-for-LIFE group challenge, these remarkable women pushed each other to reach for new personal bests. Some changes were physical, some were emotional, and all of them were made possible because it was a team effort. You think sometimes that you are done with all your steps. You aren’t. You just keep finding new ways to move yourself forward. This is how you grow.

What I wanted originally when I joined Transformation.com was a place to help share this story. I wanted to show people where this group came from and what we accomplished. I wanted to share the message of hope. I wanted to celebrate what could be done when you learn to let go of fears and reach for things which initially seem impossible. The idea of “Being the Change” seemed like the way to do that.

It didn’t quite work the way I anticipated it would. As I see it now, it’s worked out better. You see, I choose to look back and take the positive from all this. Bill Phillips started me on this journey. Without Body-for-LIFE, I wouldn’t be here today. He also gave me an amazing video to share with the world. I thank him for that.

Something has changed within me
Something is not the same
I’m through with playing by the rules
Of someone else’s game
Too late for second-guessing
Too late to go back to sleep
It’s time to trust my instincts
Close my eyes: and leap!
-Defying Gravity, Wicked! The Musical

It’s time to trust my instincts. It’s time to take that exhilarating, frightening, long overdue leap and use the opportunity I’ve been given to help others learn that they, too, can Change for the Better.

Share
This entry was posted in The Future and tagged Accountability, Accountable, Be Your Own Oz, beyourownoz, bfl, BFLer, BFLers, bill phillips, body for life, Changed for the Better, changedforthebetter, Eating for Life, I lost 100 pounds, Law of Reciprocation, michelle treichel, michellet, Responsibility, Responsible, transformation, transformation.com, What's Next. Bookmark the permalink.