You Made a Difference

Congratulations, you made a difference.

Sara Lake is a supplement distributor, personal trainer, and graduate student living in Christchurch. She’s one of the thousands of residents who have been impacted by the February earthquake. Her home suffered some damage. For the past several weeks she’s been dealing with power issues and water supply issues. Imagine having to ration water for drinking and bathing when you are a trainer. You’re used to unlimited access to water to keep hydrated. You can shower as needed after working with clients. In an instant, that luxury is gone. Sure it’s not the end of the world, but it is stressful. Sidewalks around the neighborhood are buckled, meaning you have to pick your way along the road carefully. What used to be a nice walk is now a potential sprained ankle, waiting to happen. Even her cats are having a rough time of it. Every aftershock sends them fleeing from the swaying house. Out into the garden they go. It’s safer to sleep outside, away from the wobbly house.

Go down the road a bit and you find her favorite grocery store in the local strip center. The damage is so serious they will not be re-opening. It’s an inconvenience for her. The wine expert at this location was excellent, and they had a wonderful selection of organic foods. For the employees of the store, it’s a bit more.  There’s a lost job. Hopefully the chain will be able to move them to a new location. For the owner of the strip center, it’s a major loss of rent. Not only does he face rebuilding, he faces the stress of trying to figure out how to pay his bills as he takes a hit.

Moving closer to the center of town, you see more damage. There is major buckling of roads in some places, impassable roads in others. We all know what it’s like when you have a single major road in your area facing construction. In Christchurch, you’ve lost the ability to directly go from point A to point B. There will be months of road construction to get things passable again. Houses are reduced to rubble. As you pass one flattened residence, you see a man with tears rolling down his face. This was his dream home, the home he worked years to get. In an instant it’s been reduced to a pile of timber and stone.

You approach downtown. Once you’d have been greeted by the landmark spire of the Christchurch Cathedral. Now it’s gone. 100 years of history, the pride of Christchurch is just gone. The Wizard of Christchurch says he’s moving on as well. No spire means no place to preach his own form of gospel to those who pass. In some places, people still aren’t being allowed in. It’s just too dangerous. Outside a security barrier stands a family, hands joined in prayer. Rescue stopped several weeks ago. Now they are looking for bodies. This family prays they’ll find something. There are bodies pulverized beyond recognition still buried in the debris. For those families there may never be closure.

Your actions made a difference. Thank you. 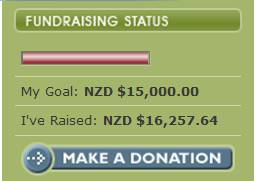 It’s not too late… you can still donate. Click here.

8 Responses to You Made a Difference